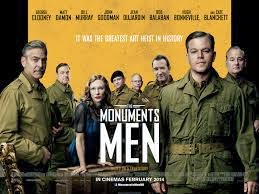 The Monuments Men is the story of a group of men in WWII who rescued some of the greatest art in history stolen by Nazi theives. I LOVE this movie.  No, it’s not the action packed Hunger Games type movies that we have these days, but it’s a true story of WWII history that we should all know. There are so many heroes during any war whose stories aren’t in books or on a movie screen and I’m happy this one made it to the big screen.  My grandfather,  Lieutenant Colonel Charles A. Grennan had his own stories of bravery during WWII that will most likely never make it to the big screen, but hopefully will be preserved and passed on through family generations.  Lieutenant Colonel Charles A. Grennan was an Engineer in charge of  the 294th Engineer Combat Battalion. I know from my Mother that during his service he saved all of his men by getting each and every one of them off a sinking ship to safety. Another interesting fact is that as a head engineer of his Battalion he had an artist with him at all times to render drawings and with that, our family has original drawings from WWII of pontoon bridges that he built to get troops across the Rhine River and other waterways.  He would name some of those bridges he built in Europe after our family.  I wish I knew more, but I don’t.  I do imagine The Monuments Men story would make my Grandfather proud.  That is, proud that one of his many granddaughters knows one more triumph that his sacrifices and all those in service made during such a heart wrenching time in history.